He told me he likes surprises, and I know he reads my blog, so that’s why I am not starting this week’s post with a photo of the finished craft of the week.  But now that he’s been sufficiently warned here and in person, we can talk crafts.

I’ve been planning on making my brother and his wife a shadowbox since they got married. With their first anniversary coming up, it seemed like a natural deadline had been set. I didn’t want to just throw some keepsakes and a photo in the box. It didn’t take a lot of thinking to add their vows as well. It tuned out far different from what I planned, but I really like it. 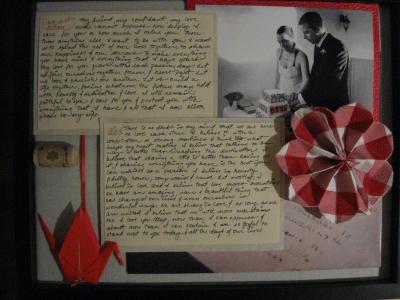 In my initial plan, I was going to cover the entire background with one of the pictures I took. But once I pulled out all the stock “art” that came with frame, I realized there was a nice off white fabric background, so I went with it. Their wedding was pretty casual, so there was no need to make some super-slick layout. I did take a photo of their guest book to use as part of the background. You can just see it peeking out in the lower right corner. I tried the assembly without that part, but it just felt very flat. The added dimension creates a completed look.

For more depth, I mounted their picture on a shiny, textured red paper. Their vows I placed on a handmade paper with plants bits in it. The types of paper also echo the feel of their wedding. My brother was wearing a three-button suit and she was wearing red Converse sneakers — it was a really fun contrast that really captured their personalities. I finished the layout off with a few things from their wedding. One of their paper cranes, a paper flower, a cork from the wedding wine and a picture of them cutting the cake. My favorite part is the handwritten vows. It’s my handwriting, but it still feels nice — much nicer than typing them out. Now I just need to get their new address and mail it away!

For any of you who are regular readers of mine, you know that Friday was a sad posting day. My job has gotten pretty hectic lately, and for about the next month or so, I am going to have a lot ( a loooooot) of work to get done. So I feel that I should warn you in advance, posts may get a bit short until things calm down.

This weekend, I did get out of the house and managed to relax with friends a bit. We had agreed to meet at a park in town, and I was the first to show. It was so calming to be outside in the cool air, and it gave me a chance to get some quick photos in. None of them are stellar on their own, but I was focusing on textures and movement to use for future sketches. Besides, you have to gather ideas and inspiration whenever you get the chance.

So now I will mentally prep myself for another awesomely busy week. And in that spirit, I will likely choose a reaaaally simple project for the week. Something I can get done during my fifteen minute and lunch breaks. I just have a feeling that some days I will want to come home and be lazy. So here’s to getting through the next week with my sanity intact.

go back in time

Daydream House reserves the right to moderate comments that are off-topic, offensive or inflammatory. Comments that are posted for the express purpose of promoting another business or site will not be allowed.

If you see something incorrect (facts, spelling errors), please email me. Please remember a human with faults is hammering out the content.

I do look forward to topical conversation as well as constructive criticism. Thanks for your feedback!